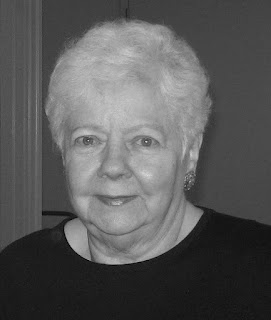 Constance Patricia Halloran died suddenly on July 24, 2008 at the home in Beaumont, California that she shared with Terrence Halloran, her husband of 40 years. They've always called each other Terrence and Constance. To family and friends, they're Ted and Connie, or Terry and Connie.

She was born Constance Patricia Roberts on August 28, 1932 in Chicago. Her parents both died when she was 14. She completed high school in 1950 at St. Mary's Academy in Nauvoo, Illinois and became a Benedictine nun. She earned her B.A. degree at Mount St. Scholastica (now Benedictine College) in Atchison, Kansas.

From 1960 to 1965 Constance taught high school English at St. Mary's Academy. Her next assignment was in Cuernavaca, Mexico, where she worked at Nuestros Pequeños Hermanos, a home for poor children. There she met her future husband, a young priest from Los Angeles. In July 1967 she requested and received a dispensation from her religious vows and returned to Illinois. A few months later, Terrence resigned from his parish ministry in Cuernavaca and followed her. They were married on December 28, 1967.

During most of the next nine years, Terrence and Constance lived in Detroit. Their sons Daniel and John were born there in 1968 and 1970. Constance earned her M.S. degree in Library Science at Wayne State University in Detroit. In 1976 they moved to California and settled in Orange County.

In the early 1980s Constance taught high school in Irvine. From 1987 until her retirement in 1992 she was librarian at St. Barbara's School in Santa Ana. Terrence worked in the aerospace industry as a computer programmer until his retirement in 2002. Daniel and his wife Suzanne were married on March 27, 1999. They have three children. John and his wife Melisa were married on July 31, 1999. They have two children.

Terrence and Constance moved to Beaumont in 2004. She consistently had two books near the chair where she was sitting when she died. One was her book of monastic prayers and Scripture readings. The other was usually a novel written by one of her favorite authors. She was reading a murder mystery when she took her last breath.

In a newspaper article published in 1998, Constance was quoted as saying, "I'm not a Catholic. I'm a Benedictine." Her husband Terrence says, "When she left this life, she stopped being a Catholic. But she continues to remind God that she will always be a Benedictine."

Their friend Tom Fox sent this message to the family:
"I can't think of more than a handful of people I've known who have reached the enlightened consciousness Connie had in her years on earth. Anyone who came into contact with her could feel this immediately even though they might not be able to describe exactly what they were experiencing. She always had serenity about her. It was within her and about her. Nothing about her was cluttered, rushed, or tangled. She offered insights and perspectives only the Buddhas among us might venture. And she did so unpretentiously. She lived a graced life. She personified grace itself."

A memorial Mass for Constance Patricia Halloran was held on August 4, 2008 at 1:00 p.m., at Blessed Kateri Catholic Church in Beaumont. A reception followed in the parish hall.